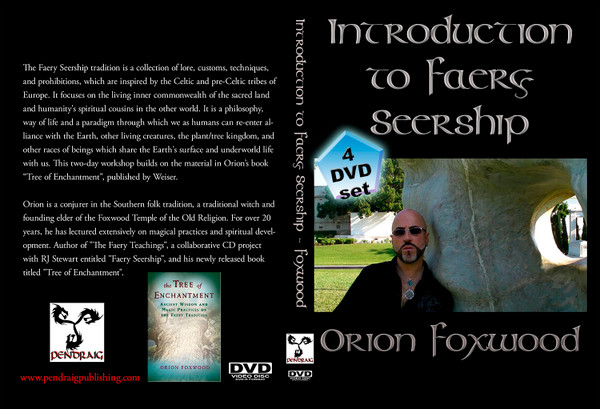 (4 DVD set) The Faery Seership tradition is a collection of lore, customs,techniques, and prohibitions, which originate in the Celtic and pre-Celtic tribes of Europe. It focuses on the living inner commonwealth of the sacred land and humanity’s spiritual cousins in the other world. It is a philosophy, way of life and a paradigm through which we as humans can re-enter alliance with the Earth, other living creatures, the plant/tree kingdom, and other races of beings which share the Earth’s surface and underworld life with us. This DVD set was filmed during a 2-day workshop.

Orion is a conjurer in the Southern folk tradition, a traditional witch and a founding elder of the Foxwood Temple of the Old Religion. For over 20 years, he has lectured extensively on magical practices and spiritual development.

This amazing set was unavailable for a while but is back in print.

You may hear some slight sound defects on some of the discs, especially at the beginning of disc #1 but in a few other places as well. We believe that these defects were caused by the microphone being touched by Orion’s jewelry and or clothing. We’ve tried, unsuccessfully, to correct them but since demand was so high for this set to be back in publication we decided to reissue them as they are. The defects in no way interfere with the Orion’s incredible teachings and guidance.

We hope that you enjoy this wonderful, magickal DVD set as so many others have.

The Crooked Path Journal: Vol.2 No.1

The Crooked Path Journal of the Nameless Art Issue #2

The Crooked Path Journal of the Nameless Art Issue #6